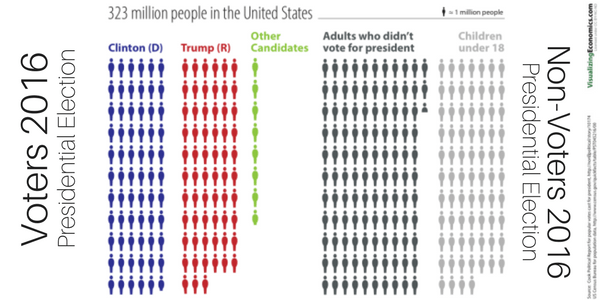 2016 Voters in The Presidential Election

If you don’t get involved then you won’t be involved, to stand on the sidelines and rant and rave doesn’t make much sense if you’ve not had a hand in creating your current situation. Democracy has an evil twin and it’s called apathy. If you do nothing then something still happens. Not making a decision is also a decision.

I remember the first time I voted, I was 18 years old and my mom drove me down to the voting booth to make my first “official” cast. She allowed me to think for myself and ask questions about each candidate, she mentioned the pro’s and con’s of each one. She explained about the process and the fact that my vote counts as every vote counts. It’s our right as citizens to cast votes and voice our concerns to fellow candidates. She also mentioned that an elected official’s job is to work for the public good. She said that it’s impossible to make everyone happy with every decision but that all politicians should strive to create the best solutions to the challenges that face our society.

I understood this and took it to heart. However, now that I’ve been around for over 50 years, I’ve come to realize that very few high powered politicians embody these basic tenets. They seem to start out with the best intentions and then slowly but surely forget to fight for the little people. The people that believed in them and voted for them, the people who are in some ways powerless to fight for themselves and are desperate to have a strong and just leader. These ubiquitous politicians are known as “Career Politicians.” They don’t just go into public service to do their part to make society better. They want to remain in their “Powerful Positions” and stay in government employ for as long as they can.

What’s wrong with getting elected and serving society and then going back to a different career? How interesting, honest and fair would that make our congress? Normal people who live in society as employees, business owners, entrepreneurs or tradespeople and strive to do their best for their family and community. I’m wondering how awesome of a job they would do and how much serious thought and concern they would devote to important issues?

These short term politicians would be the voice of their constituents and would really have to listen, learn and apply their best efforts to follow the will of the people.

A democratic system for electing official representatives may not be the absolute best system but it’s the best system we’ve got and it’s real power is catalyzed when all registered voters actually show up and participate in all elections. Maybe one day we will create a system that allows for normal people to take on the task much like getting called up for jury duty. I can’t imagine that they wouldn’t do a better job than most of our career politicians do. 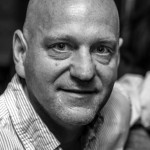 Dominic writes, speaks, inspires, motivates and teaches on the most important aspects of your business including Sales, Coaching, Team building, People Management and Business Development and on some rare occasions, his political views. Get weekly access to his blog & training videos FREE by subscribing.  CLICK HERE

The Importance of Sales Attitude and How to Build Your Business